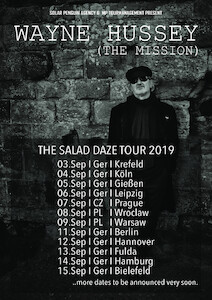 Jerry Wayne Hussey  is an English musician who was born in Bristol, England. He is best known as the lead singer of The Mission, and for being the guitarist with The Sisters of Mercy.

Hussey grew up in Bristol. He was influenced at a young age by Marc Bolan and his band T. Rex, and was thus inspired to become a guitarist. Brought up in the LDS Church, he rebelled against his parents' wishes that he serve as a missionary and moved to Liverpool in the late 1970s to join the scene around Eric's Club, a noted nightclub of the time.
Hussey started to perform, most notably with Pauline Murray and The Invisible Girls, with whom he started songwriting. The first success for Hussey came when he joined Dead or Alive at the request of frontman Pete Burns. After Burns retreated to become more studio-based, Hussey decided to leave and was offered a position with The Sisters of Mercy, concentrating on 12-string and 6-string guitars. When the Sisters of Mercy disbanded, Hussey and bassist Craig Adams set up The Mission, recruiting Mick Brown on drums and Simon Hinkler on guitars. He lived in Leeds for a while before moving to London towards the end of the 1980s.
Hussey has produced and played on records by The Mission's Mercury Records labelmates All About Eve and in the late 1990s provided some remixes for Cleopatra Records. Hussey has played live with both Gary Numan and The Cure. He is a Liverpool F.C. supporter and after his team's victory in the Champions League Final of 2005, he composed the song entitled "Draped in Red" featured on the album God is a Bullet. Hussey currently lives in São Paulo, Brazil

Since 2002, Hussey has regularly played solo shows that features Mission material, new songs and covers. After he wound up The Mission for the second time in early 2009, he released his first solo album called Bare in October of that year on the Sony Music label.
In May 2009, Hussey announced on The Mission's website and in an interview on BBC 6 Music that he and Julianne Regan were working together on an album of cover songs, reinterpretations of old material and new songs, and invited fans to suggest songs for the duo to cover. This album was eventually released in the autumn of 2011 as Curios under the name Hussey-Regan on Cherry Red Records. In 2014, he released his second solo album, Songs of Candlelight & Razorblades, of largely acoustic songs.