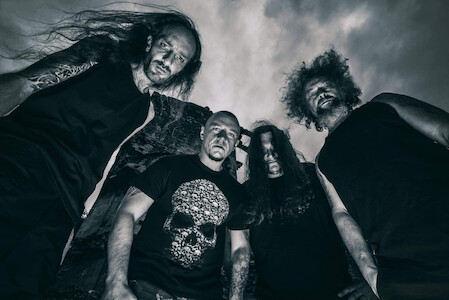 "We do like simple, straight forward videos. Wanted to show you dark energetic video. Just like we are! Ashborn's strong side is a live performance. That's why the video is showing us going crazy. Headbang 100%"

Ashborn was formed in the second half of 2017, with our musicians have many years of experience from previous bands such as Ghost, Grin & Dierevers. We started our adventure by going to the Initiate audio and media, at the beginning of December 2017, to work with Neil Hudson where we have recorded two tracks to be released. On the 10th of March, a week before our debut gig, we presented a brand new lyric video, for our song Every Word. This was done by Andy Pilkington from Very Metal Art. On the 17th of March, we played our first headline gig in Northampton, & on the 3rd of May, we went through to heat 5 m2tm in Milton Keynes. This was followed two days later by headlining a show in the O2 Institute in Birmingham. On the 18th of May, we had the pleasure to play in the m2tm semi-finals and went through to the finals. On the 26th of May, we won the final, the first time a Polish band has ever done this in England, and now we have a slot at the Bloodstock open-air festival 2018!

After nearly destroying the New Blood Stage at the BOA our band was even more focused and started to play much more shows. Headlining quite a few of them or supporting some big names like Vader, Krysthla or Incite. While enjoying all the shows throughout England, the band has been preparing for the full-length debut album. Finally, in May 2019 Ashborn spent 2 weeks with Mr Neil Hudson at Initiate Audio and Media and recorded the album. The first track from this album 'Light that creates darkness' alongside with lyric video has been released a week before our support show with the polish monsters Vader at the HOP festival.
https://www.facebook.com/AshbornUK/