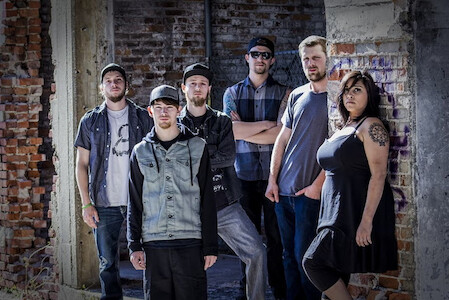 The Less Fortunate’s self titled debut album highlights a combination of melodic clean singing along with and heavy, in your face vocals, that assure you will take a ride in the hearts and minds of not only the band, but hopefully reaching into your own thoughts and feelings.
This dual fronted 6 piece metal band from Southwest Missouri, are primarily influenced by late 90’s nu-metal and mid 00’s metal-core acts such as Killswitch Engage, The Devil Wears Prada and A Day To Remember to name a few.

Balanced by the twin vocal of their front-woman Blanca and front-man Cory, The Less Fortunate have captured a sound that gives you a touch of harmony with rage. The aggressive high energy from tracks like Levels and Utilities is equally matched by the catchy melodies of the tracks Vice Versa and Black Butterfly. The Less Fortunate is an album of deep emotion, heart and a message that needs to be heard.

The name The Less Fortunate is based on the idea that we are all “the less fortunate”. Everyday, people fighting struggles within themselves whether that be depression, anxiety, financial struggles or anything else that brings you down. The Less Fortunate are trying to spread a message of hope through their music and lyrics to help everyone to overcome such adversities. Give the album a listen and be redeemed!

All Recording, Mixing and Mastering was done by Kyle Simpson of Simpson Studios in Tulsa Oklahoma.