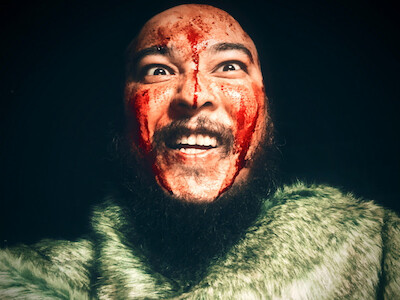 The Ironfist (SG) Necro Wave of Blackened Heavy Metal
The Ironfist is a one man NWOBHM (Necro Wave of Blackened Heavy Metal) project from Singapore and was originally formed in 1998 as a heavy metal quartet. The band evolved musically, experimenting with different genres such as black metal, thrash metal and even crusty punk at some points. With the constant frequent chaotic change of lineups, The Ironfist finally stands with Rip Alhuzzred alone, upholding the Fistial flag and invading the sonic battlefields as a one man army! Fistial Visioned & Iron Willed!
As per documented by Encyclopedia Metallum, The Ironfist has had multiple releases since 2001. This includes splits releases, singles, EPs and to date, 4 full length albums. The band promises more stage battles and releases to come, as the nature of Rip Alhuzzred will not turn down any opportunity when the need arises …leaving no stone unturned!
Watch out for the new album, Tyrant’s Return, set for release via Sliptrick Records in 2023.The Ironfist is:
Rip Alhuzzred – All Voices & Music
https://www.facebook.com/fistoftheeast
https://www.youtube.com/playlist?list=PLcwLe6GO3V69WO65V7nfSoQo_ytn32DZG