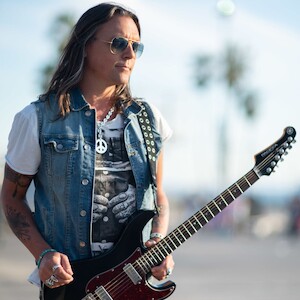 “This kind of album has been a dream of mine since I sat in math class and drew pictures of Marshall stacks in my school books when I was 14-15 years old", the Danish musician/producer comments. "The songs have just added up over the last 30 years and this is the right time for me to finally fulfil this lifelong dream”.
“I have learned that I’ve made a bit of a name for myself around the world and I’ve have often been asked for my own records especially after my performances with Glenn Hughes. I know I’m not in the same league technically as Joe Satriani and Steve Vai, and stylistically it’s way more inspired by 80s movie soundtracks, where I first fell in love with the lead melodies being played on the guitar as opposed to being a lead vocal line. But I promise I will deliver my 26 favorite tricks on the album”, says Soren Andersen with a smile and his typically relaxed mood.
The album features guest appearances from among others Chad Smith (Red Hot Chili Peppers), Glenn Hughes, Marco Mendoza and fellow Dane Ida Nielsen (Prince).

You might know him for his 10 year long relationship as the guitarist for Glenn Hughes (ex-Deep Purple), but the 46 year old Dane Soren Andersen is much more.
Producer, co-owner of famed Medley Studios in Copenhagen, ambassador for world class equipment like TC Electronic, Yamaha Guitars and Line 6 and of course playing the six strings with a bunch of other great musicians.
These include Mike Tramp (ex-White Lion), Marco Mendoza and Tommy Aldridge (ex-Whitesnake / Thin Lizzy), Joe Lynn Turner (ex-Rainbow), Pretty Maids, The Dead Daisies, The Answer, Dave Mustaine (Megadeth), Eric Martin and Billy Sheehan (MR. Big), Artillery, Tygers Of Pan Tang, Phil Campbell (ex-Mötorhead), Electric Guitars, Jesper Binzer (D:A:D).
His work as producer and guitarist on the Glenn Hughes album "Resonate" made more people take notice of the brilliant Danish guitar player. For instance the maestro Joe Satriani who had this to say to the music site Music Aficionado:

“I've been listening to this record a lot. The songs go by and I go, "Wow, listen to that!" This guitarist is somebody I don't know who's also the co-producer, Soren Andersen, and man, he's so good. It's always cool when you hear somebody new who really impresses you. […] A guy like Soren Andersen is totally into the future. His playing is very natural-sounding, and he manages to perform to the songs while still putting in some crazy textures. His choice of notes is interesting—every time I put the record on, I go, "Hey, I didn't hear that before." I love when an album does that to me. Glenn has always played with great guitarists, and he's got another one with Soren Andersen.”