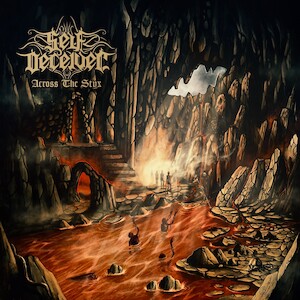 Self-Deceiver is a Blackened Death Metal band formed in Sao Paulo, Brazil, in 2012 by Jorge and Sergio who moved back to Bogota, Colombia, in 2016. The band was inspired by European (mainly Scandinavian) Black and Death Metal bands, but there are also influences from the American Death Metal scene of the 80s and 90s, resulting in a mix of tempos in each song, with melodic parts, middle beats, blast beats with tremolo guitars, symphonic/classical elements and guttural vocals.
Lyrically and philosophically speaking, Self-Deceiver is inspired by human existence and its meaning, and by human actions such as violence, the search for glory, war, deceit, the hypocrisy of religions, among other topics. For the band, creating an atmosphere and deliver a message through their music is key over just being an extreme band.
Nowdays the band is still conformed by the same two members and in December of 2022 released the first album entitled Across The Styx, which is a compilation of songs composed during the Brazilian and Colombian period.