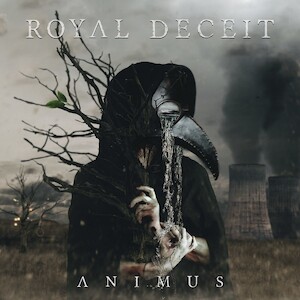 Brand new metalcore outfit Royal Deceit release first single 'Echoes of Hate'
Echoes of Hate’ is the first single of off the brand new metalcore band ROYAL DECEIT’s upcoming debut album ‘Animus’. On this first release, the band displays their trademark sound with fast-paced rhythm-sections, crushing riffage, and a fierce vocal by charismatic frontman Mathias Uldall-Jessen. Watch the accompanying lyric video above.
Guitarist Jesper Mamsio explains: “‘Echoes of Hate’ reflects on the promise we made to never again fall prey to inhuman ideologies where none are equal, and minorities are hunted for being just that. Do we keep that promise when we look on how and whether or not history repeats itself?”.
The coming debut full-length album is produced by Claudio Andersen at LAK Studios with assisting vocal production by Mirza Radonjica (Siamese, Daze of June) and has been mixed and mastered by Chris Kreutzfeldt (CABAL, Mol, Scarred by Beauty). ‘ANIMUS’ will be available through Prime Collective on January 31st 2020.
The first single ‘Echoes of Hate’ is already available on all streaming services.
TRACKLIST
1. History Repeats
2. End of Days
3. Bite the Curb
4. Just Business
5. Elitist
6. Chasing Ghosts
7. Pariah
8. Backstabber
9. Hang Them High
10. Oceans of Black
11. Echoes of Hate