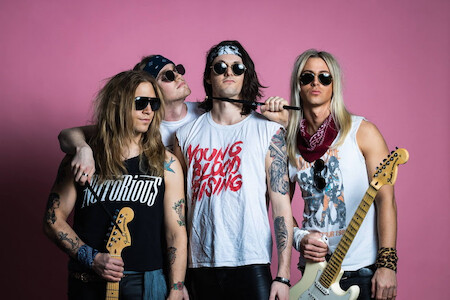 Notörious is a hard rock/glam metal band from Bergen, Norway. The band was formed at the beginning of 2018 with the intention to bring back to life the classic sound of the hard rock/glam metal bands that ruled the Sunset Strip back in the early 1980’s. The band is inspired by legendary groups such as Mötley Crüe, Van Halen (not Van Hagar), Yngwie Malmsteen’s Rising Force, Europe, Skid Row and Poison, etc. Being a Norwegian band, they also draw inspiration from the black metal scene and incorporate some elements of this into their own music adding spice to the mix.

The band released their first EP called Seducer in the spring of 2019 and got great reviews, saying that the band was able to capture the rawness of those earlier mentioned bands …yet the music also has a lot of originality to it. Now the boys are ready with their first full length album Glamorized which will be released via Sliptrick Records in 2020.