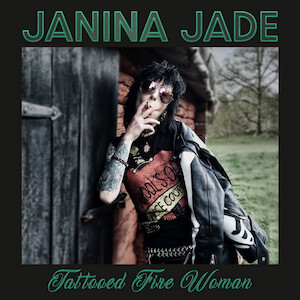 Janina Jade says; “Tattooed Fire Woman is a really strong anthem like song, it is about standing up for who I am, what I believe in, being true to myself, never giving in or giving up no matter what.
I was asked to describe the concept behind this song, but you know what, I never sit down with a plan or concept when I write. The lyrics and music just pours out of me, I get this very strong feeling that something needs to come out so I grab a guitar and within 10 minutes I have the basic arrangement, lyrics, vocal melody and chord progression. It is almost on a totally subconscious level when i write.”
Tattooed Fire Woman is recorded together with studio musician/producer Tommy Denander (Alice Cooper, Deep Purple, Hollywood Vampires) who plays on it and has produced it.
All music and lyrics written by Janina Jade