Interview with the Vagrants 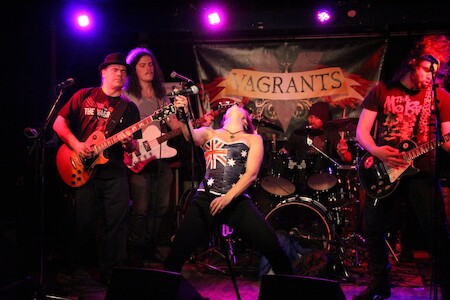 Alan – Hello, band. Tell us few words, or sentences, about your formation.
the Vagrants - We started The Vagrants in 2002 in Melbourne, Australia. Renate Iorio the lead singer also plays sax, keys, flute and sings, and
I write the songs and mainly do backing vocals, some lead vocals and play guitar and keyboards. That was the core of the band, and then we found a great drummer, total pro on bass, and a rhythm guitar player James Spiteri that play with us for 11 years. None of the other band members wanted to move to Germany with us, so we had to find some new people.

Alan - You were firstly only Australian band, what you had to do for people to notice you?
the Vagrants - Our first tour to the USA, and Europe lasted 3 months. I booked all the gigs by myself, making phone calls, finding support bands on Myspace, and sending out CD's and posters to the US and Europe. It worked, and we got some great connections. It cost me $2,000 in postage and $1,600 in Phone calls, plus the CD's posters, etc.. We sold our house in Australia to finance the tour.

Alan – When, in what year, have the organizators of concerts and festivals outside of Australia started to notice you?
the Vagrants - We had to play small clubs on the first tour, but after that, we got festival gigs immediately afterwards. We came back to Europe almost every year for 3 months, but then we decided to move here. We love living in Europe, and the flights back and forth were costing too much time and effort.

Alan – Where you went out of Austaralia the first time? How long were you there and where exactly? And some of your new experiences cause of it?
the Vagrants - We landed in LA, and spent 3 weeks on the west coast and 3 weeks on the east coast. We got a lot of help from other musicians, and club owners. It was amazing that people all over the world were so friendly, giving and there were so many fantastic local support bands in all the cities and towns we played in.

Alan – By what labels are you releasing your albums? And how have you got in contact with them?
the Vagrants - I have the rights to all our physical CD's, and I can send them too you. Independent Digital is our digital aggregator, so we are on Spotify, and 170 other sites for listening. I'm happy to send some CD's in the post to you. No worries.

Alan – After that you started to raise the world with your band. Where have you been? On what continents? And what about your playing there? How is it?
the Vagrants - We have played every state in Australia, 9 states in the USA, and 13 different countries. We just love being on the road and it seems that people really love rocking out to our original music. That was our biggest surprise. Also we find that people like to buy us beer and shots of Jack Daniels... that is good and bad. We found that China was a really different experience to what we expected. It doesn't feel so cramped, India was very cramped and crazy, the USA has great motels everywhere, and free marijuana, and Germany has the best beer.

Alan – For how long time you now like a band live in Germany? And is Germany nowadays the best land for you to play in?
the Vagrants - We bought a house here. I think that says it all. We have been living here for 3 years now.

Alan – Some notes – the differences between Germany and the world around you, how is it for you like for a musicians?
the Vagrants - People still support live music in a great way. Buying CD's and T-shirts, and are really a lively and involved crowd. We love it here.

Alan – Were you some time in the Czech Republic or in Slovakia like a band? If yes, where?
the Vagrants - We have played a lot in CZ, but not Slovakia yet. We played in Karlovy Vary, Prague, Plzen, Franziskovy, Teplice, and
Mariánské Lázně, but that was a long time ago. We are ready to go back!!!

Alan – Were you some time in the Czech Republic and in Slovakia on a holiday, or a trip? If yes, what you liked the most from the seen places, or what was just the best in those locations?
the Vagrants - We love Plzen and Prague, the women are beautiful and the beer is great.

Alan – For quite a long time you haven't released any CD nor LP. How are you on it in the view of future?
the Vagrants - We have to work with the way the world is now. We will keep releasing single songs as we record them and in the end, we will put together a CD of the best songs.

Alan – Thank you very much for the interview.
the Vagrants - Thank you Alan, it was nice of you to give us the chance, much appreciated.

More about the band the Vagrants you can learn from other posts in our pages, or just click on the archives of our radio and listen to the interview.

Steve and Renate were responsible for the group
https://thevagrants.com