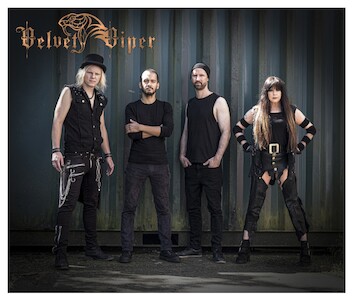 Albouš - Hello Who Are you And Who is answering on the questions?
Hi, this is Jutta and Holger.

Albouš - How long are you on the scene.
Jutta - I started 1969 with HAIR and Jesus Christ Superstar
1984/85 I made my decision to play Heavy Metal and created Zed Yago.

Albouš - How did you come up with the name?
Jutta - After breaking up with Zed Yago, I continued under the name Velvet Viper.
Holger - The name “Velvet Viper” is connected to egypt mythology and the story of Cleopatra. The Song “Holy Snake Mother”on our new album is about that story.

Alabouš - What was your First gig?
Jutta - Velvet Viper’s first gig was on tour with Sinner back in 1990.

Albouš - Did something funny or interesting happened when you were on gigs?
Jutta - The best thing in the music business is to be on stage and present yourself to friends and fans.
Holger - We have a great line-up and work with great people, so there is always a lot of fun and funny things happening all the time. Otherwise we wouldn’t do the whole thing.

Albouš - Do you Have any favorite song from you?

Jutta - I just love them all because we want to "let metal be your master".

Albouš - Were you inspired by Someone or Are you inspired by your day to day life ?
Jutta - I always wanted to make music, that expect my own mentality. Because the world needs originals and no copies.
Holger - Our lyrics are mostly inspired by folk tales, myths and legends. As a guitar player, there are of course quite a few I look up to. When I was young I especially wanted to play like Randy Rhoads, Gary Moore and Zakk Wylde.

Albouš - Were you at any point in Czech Republic?
Jutta - I had really great open air festivals in 1993 with the Czech band Citron. Great musicians and really cool friends. They played on the last CD for the Zed Yago concept: "To be or not to be" 1992/1993

Albouš - What is your favorite, song from your latest album
Jutta - We love them all. But have a look at our official Video „Holy Snake Mother“

Albouš - What was the first song in the album and can you tell me something more to the lyrics
Jutta - The first song is “Sword Sister” here some explanations about the lyrics:
SWORD SISTER : A sword sister does not give up even if her life is like a barren field and a bird with broken wings. The cowardly person dies many thousands of times before he really falls into the pit. She will always find an anvil and hammer to forge a new sword out of pure steel.
LET METAL BE YOUR MASTER : A declaration of love to metal. We are part of everything we encounter. We are part of the scene and the people who do us good. Conclusion: we let Metal be our master in all ways. Let metal be your master
COSMIC HEALER : The story of ISIS from the Egyptian mythology of the first goddess and mother of mankind. She was respected because she was very fair. When I showed Holger the lyrics, he said: Hmm ... Jutta, we can't leave ISIS like that, you know what's going on in the Middle East, bad things happen there, let's find another name for the song. Cosmic Healer, because I believe that we have more energy than we think and that comes from somewhere ..... and here is the digital single from -Cosmic Healer-

HOLY SNAKE MOTHER : Cleopatra brought snakes from the riverbed to their tomb. The snakes should kill them quietly and quickly with one bite. All of them bit only one of them, the VELVET VIPER. She put Cleopatra's crown on her narrow head and dug her way through the stone grave to freedom. Velvet Viper, the holy snake mother who never killed and in her wisdom recognizes and preserves the mysterious things.
VOICE OF AN ANARCHIST : Misunderstood and cursed is anarchy. So the anarchist complains, the word is strong and not just a horde of common people. Hear the anarchist's voice: He doesn't want to rule, but neither does he want to be governed.
SASSENACH : The story of the Saxon Lady Sassenach. She allows a weakness from time to time, but soon she is ready again, because her loyal friends support her. They are the glue that holds everything together. Sassenach is the imaginary ruler of Alpha and Omega. You alone determine the beginning and the end for yourself.
OSIRIS : Prehistoric god of fertility and mother earth. A figure full of mystical magic, with the head of a hawk. Osiris, brother of the no less revered Isis. Gods and judges of justice for the living and respect for the dead.
ON THE PROWL : Everyone who has dedicated his life to music for many years asks himself from time to time how long it can go with rock 'n roll. The time bomb is ticking and waking us up. That's why I sing every time as if I won't experience the next morning. Always on the lookout for ideas, looking for the next song that still has to be sung.
LONG SHADOW : When the culture's sun is low, even dwarfs cast long shadows. People don't listen to the warner, go on as if nothing is wrong. A material world creates material people. We mistreat the earth and saw of the branch we are sitting on. Don't play games with a force greater than you.
DARKNESS OF SENSES : A poetic text about time and the moment of moments. Time stands still and the night knows no tomorrow. Don't hold back your tears when you run out of dreams to defend. Believe in the return of dreams when dark thoughts accompany you. A dream can always be started even if it cannot be ended.
GÖTTERDÄMMERUNG : The story of Rhine-Gold from the Nibelungen saga. The Rhine daughters guard the Nibelungen treasure, that is their only very important task. But unfortunately they are foolish and so Alberich, the lord of the Nibelungen underworld, was able to steal the gold treasure. From this he forged the ring of power and an invisible helmet. Wotan's daughter has been stolen by the giants and now he needs a lot of gold to redeem her. Wotan Alberich is able to steal the invisible helmet through a ruse. He just wants to give it back for gold. That's how it happens. Wotan gets the gold and can free his daughter. But the Rhine daughters plead and beg him to give them back the gold, but he keeps it for his daughter. And so the daughters of the Rhine curse the gods and that's how the twilight of the gods begins. A new acoustic version of the song from the CD "The pale man is holding a broken heart"

Albouš - What is your favorite album from your band?
Jutta - Velvet Viper „Cosmic Healer“
Holger - Some info on the recording session for “Cosmic Healer”: We recorded the album was recorded in summer 2020 with windows open wide for pandemic reasons, but we were all together in the studio and recorded the basic tracks (bass, guitar, drums) together to have a kind of a live situation, because we are mainly a live band and wanted to have the power of one of our shows on the record. The tracks were mixed by Ralf Basten, who also did the legendary first two Zed Yago albums, so we were able to get that classic sound right.
As it will not be possible to do live shows in the foreseeable future, we will record a concert without a crowd on video next month to showcase the new songs and some old favorites. The video will be available on YouTube this summer.

Albouš - Thank you for your time, Now you Have time to say anything to our readers / fans.
Jutta - To all metal friends and fans in Czech Republic, be honest and never forget the roots, metal rules!
Only loud music can destroy the evil spirits and I tell you there is a lot evil around.
Take all your friends to the clubs where live bands playing their own original music. This could be the sheet anchor to keep rock music going.
Hopefully we get the chance to come to your hometown to see all of you face to face.

Till then Jutta and Holger VELVET VIPER