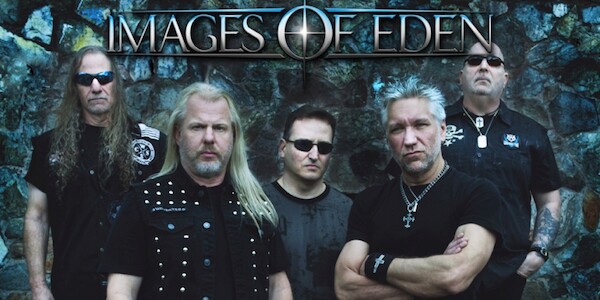 Interview Images of Eden
heavy christian metal Pennsylvania
Albouš - Who Are you And Who am i speaking to
Images of Eden – Gordon Tittsworth (founder, vocalist and songwriter for Images of Eden).

Albouš - When did you started your musician career
Gordon Tittsworth  – I started playing guitar at age 13 but my first worldwide album release was in 2001 with the debut Images of Eden album, “Chapter I”).

Albouš - What was your first gig And did something funny or interesting happend
Gordon Tittsworth  - My first gig was at age 13 where I played guitar in a short set, but nothing too interesting happened.  However we had an interesting experience when touring with Doro Pesch and Metal Church in 2019.  We were at the Whisky-A-Go-Go and it was about 10 minutes before we were about to hit the stage and I fell off the stage and took out Doro’s and Mike Howe’s wireless transmitters, knocking them onto the floor.  Thankfully we got everything fixed in time but it could have been very bad.

Albouš - How did you come up with the name of your songs
Gordon Tittsworth  – With regards to song titles as well as lyrics, I never really think too heard on them.  Instead, I usually get hit with inspiration out of nowhere and compile an ongoing list of notes for when I start recording.  I get all of the inspiration in pieces, make many notes, then edit all of my notes when I start tracking the initial demos.

Albouš - Did you ever played in Czechia And Will you play in Czechia when your gonna Have Chance
Gordon Tittsworth  – We have never played there but very much hope to.  We have contacts in Europe that we are working with to try to get some dates booked there.  Our goal is to get here in 2022 so we will see.

Albouš - How did you guys come up as a band, did you knew each other before
I – I actually started the band as a one-man project in 1998 with a session drummer with the goal being to form the full time lineup based on the first album (Chapter I).  After this, we formed the first lineup which later recorded the second album.  After that, there were multiple member changes for each album.  Finally, after 20 years and 21 members, we feel as if we have the final lineup now.

Albouš - What was your first song that you played live
Gordon Tittsworth  – “Stealth” off of the album “Chapter I”.  I believe the show was in November, 2001.

Albouš - Whats your last album And can you Tell me something more about the lyrics
Gordon Tittsworth  – We just released our 5th album, “Angel Born” on March, 26, 2021 through Pavement Entertainment.  This is our absolute best album we have ever released.  Lyrically, we write about all of the life struggles that everyone faces but we do so in a very uplifting way.  We write about hope, strength, inspiration, overcoming trails of life. This particular album is about healing from loss and grief.  It is also directed to the “broken” (depressed, suicidal/ self-mutilating, victims of narcissist control- abused, neglected, beaten down in any way- mentally, physically or emotionally).  This album is a reminder that we were all born "perfect" and blemish-free.  It is the world that has soured us, beaten us down, made us feel less than, but no matter what you think of the person in the mirror, (s)he will ALWAYS be that perfect "angel" that was born so many years ago!

Albouš - Thank you for your time Now you Have time to say anything to our readers
Gordon Tittsworth  – Yes, over the last year shutdown, many bands are now hurting because they have not been able to play for over a year.  If there is EVER a time to support music and the artists you love, that time is NOW!!!  As artists, we don't get paid for radio/ YouTube plays or having thousands of listeners on Spotify.  The only way musicians can keep creating music and continuing on is to sell records and/ or play live concerts.   Since concerts will still not be back for a little while longer, why not give the ULTIMATE support right now and buy the CD / digital album/ LP and have something that gives back to you every day?
THE WORLD HAS CHANGED AND WE NEED YOUR HELP TO HELP KEEP MUSIC ALIVE!!
“ANGEL BORN” CD/ Digital/ LP PURCHASING LINKS (Full double-LP vinyl only available at Images of Eden Online Store):
www.facebook.com/imagesofeden/
www.imagesofeden.com
https://amzn.to/3vnFwEn
https://apple.co/3t5QJIt
https://imagesofeden.bigcartel.com/products