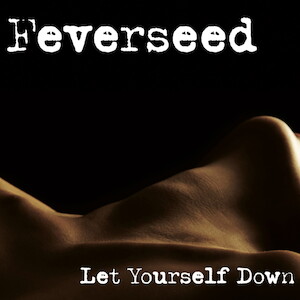 New York, NY – FEVERSEED is a New York rock quartet founded by singer/lyricist George Panagakos and bass player Chris Crosby. With their new LET YOURSELF DOWN EP, the band delivers a powerful and soulful debut that is sure to please fans of guitar-driven rock the world over. LET YOURSELF DOWN features three remarkable songs, each with its own personality. The title track is an anthem of loss and redemption, “Beat Me” is a fast and sexy powerhouse and “Imprint” is an intimate epic of love and longing. LET YOURSELF DOWN releases worldwide on February 1st, 2021 through Hice Records.

Chris and George, both multi-instrumentalists, have been writing and recording together for years. They’ve explored many musical genres, but the common threads of their memorable and melodic compositions and George’s versatile, unique and powerful voice are always present. In 2019 they decided to quench their thirst for rock and FEVERSEED was born.

The two best friends worked on the material for their new band from November 2019 through August 2020, and by September 2020 they had chosen the three songs that best represented the scope of Feverseed’s sound. With George producing, singing and playing rhythm guitar & piano and Chris playing bass & guitar, they were ready to hit the studio and record their debut. To complete the band’s lineup, they were joined by lead guitarist Wibbus and drummer Drew Bertrand shortly before recording commenced.

LET YOURSELF DOWN was recorded in October 2020 at Suffolk Recording Studios, mixed by Chris Laybourne at Coop Studios and mastered by Roger Lian. The recording and mixing process was very much a group effort. As George puts it, “While I did serve as producer of this EP and had a clear idea of what I wanted these songs to sound like, it was a very collaborative experience. I’m just a piano player who decided to pick up a guitar and rock. Chris and Wibbus are very much responsible for the guitar sound we achieved on the EP. Same goes for the drums. I told Drew what I was looking for, and he chose the right drum kit and set up the microphones perfectly to get me just what I needed. As far as the mix, Chris Laybourne was invaluable at taking my rough mixes and bringing them to life so beautifully, achieving the sound for these songs that I had envisioned from the very beginning.”

The new FEVERSEED debut LET YOURSELF DOWN EP releases worldwide on February 1st, 2021 through Hice Records. The band is currently preparing a North American tour in support of their debut release when live performance restrictions are lifted.

To purchase or stream the new FEVERSEED debut LET YOURSELF DOWN EP: www.feverseed.com/lyd

For more information including tour dates or booking inquiries: www.feverseed.com