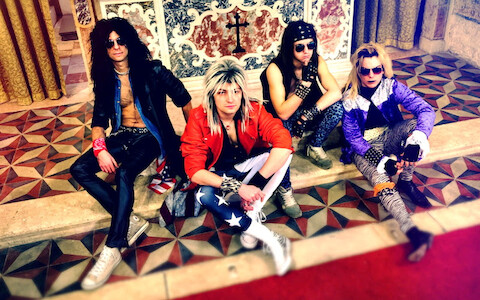 Italian glam rock band Fallen Angels have released their new video for the track Psycholove taken from their album release Even Priest Knows.

Here’s what the band explaining about the track and video; “Psycholove is a topical song (written thinking of the typical life of the middle-class worker), which speaks of male auto-eroticism caused by excessive laziness from frequenting the outside world, or total resignation to attend party venues, or clubs where women are present, because for fear of rejection, added to a dose of shyness, a person decides to shut himself up in his world and convince himself that he no longer loves women.

The song that bases its roots on issues of the present and the future: in a world increasingly surrounded by technology that increasingly distances man from the “real world”, where going out to have fun is no longer among the first need. Innovative and enveloping video games are already enough, the god’s Supermen and super-women Chat on Social all day long, Dream and build an unreal life closed between 4 walls, different habits and the shock when you find yourself interacting with the real world and with people around you, and then when the stimulus arrives … (the only one that could push us to go out and get to know the real world) we simply carry out the most ancient and simple act to make people sexually satisfied… and then for everything the “technology” takes care of the rest…..

The video clip appears in a fresh and modern tone, alternated by musical performance scenes and acting scenes that contain subliminal messages on the themes described. The choice of this style goes hand in hand with the musicality of the song, in which you they can find sub-genre influences of pop and rock, in its own way therefore innovative compared to other songs. Another reason for this style of video / music is the desire of the band to be noticed as a band of 2019 and not a revival band trapped without exit in the 80’s… Therefore, beyond the “classic” look behind this mask you can find musical experimentation, current events, and knowledge, and for Fallen Angelsmusical influences are the most important thing to try to look forward.”

Fallen Angels – Even Priest Knows
Even Priest Knows represents the bands desire to revive the spirit and atmosphere of the 80’s. It’s an album of 10 tracks that passes from more direct songs to real reflections on modern society, touching topics such as loneliness, war, alienation, viciousness, even themes with a simple appearance but surrounded by multiple meanings, to tracks with peaks of amusing sinfulness and esoteric-ism, all surrounded by riffs of pure rock ‘n roll and sharp melodies …here

Buy now from: Shop Sliptrick | iTunes | & many more
Listen to Even Priest Knows on: Spotify

Even Priest Knows
Released on April 30th, 2017 on Sliptrick Records