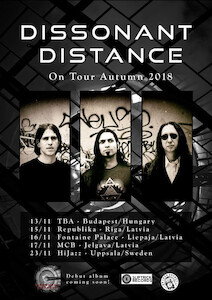 Improvisational progressive metal group Dissonant Distance have announced 5 new dates in November as part of their campaign leading up to the release of their self-titled debut album on November 16th, via Sliptrick Records.

The bands music can be described as spontaneous, free and in the moment, encompassing elements of progressive rock, jazz, fusion, blues and Indian music. It’s improvised music fused with the spirit of punk and jazz.