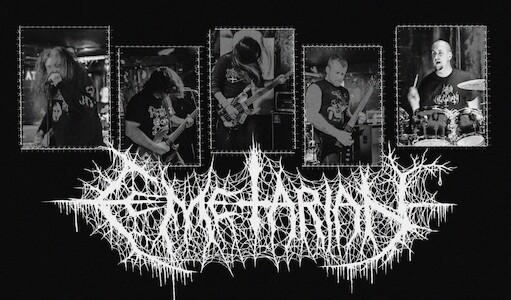 A veritable goldmine of underground veterans, Cemetarian include members of labelmates Thy Feeble Saviour as well as current members of Blaspherian, P.L.F., and Oath of Cruelty as well as ex-members of Morbosidad and Sacreligious Torment among many others. The band was formed in 2019 by guitarist Francisco Pulido and drummer Matt Heffner as an outlet to play death metal inspired by the late '80s /early '90s death metal underground. Vocalist Daniel Shaw joined shortly after, and the trio recorded the Tomb of Morbid Stench demo in 2019. The demo was released on tape, CD, and 7" formats and received a wealth of positive feedback. In early 2020, Dave Callier joined the band on second guitar and Charles Sepulveda on bass guitar. This lineup is set to record two split releases and their debut album for Hells Headbangers.

Says Pulido, "We are very excited to work with Hells Headbangers for our debut album. There is no better label to work with in the underground. Total professionals at Hells..."

More info to be revealed shortly. In the meantime, stream Tomb of Morbid Stench HERE at Cemetarian's Bandcamp.
https://www.facebook.com/cemetarian
http://www.hellsheadbangers.com