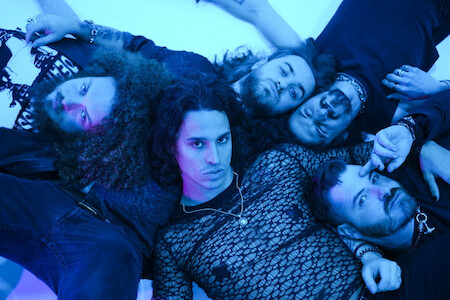 Hailing from Dublin, Ireland, Brake Loose, featuring frontman Alex Murillo, guitarist Tico Pellegrino, guitarist David O’Grady, bassist Eoin Madden, and drummer Dylan Martin, are five guys looking to achieve the dream of rock ‘n’ roll. One of touring and tearing apart the most iconic places in the world.
Led and formed by the reckless Venezuelan poet and leader Alex Murillo, they have established themselves as a notable force on the local rock scene. Selling out their first headlining show at The Workman’s Club in Dublin and being featured in Hot Press Magazine as “Hot Irish Acts for 2022”. “We want to be legendary,” says Alex. “We want to be one of the best rock bands in the world, living up to our idols: HIM, The Doors, The Cult, and Motley Crue. Headlining stages, performing to crowds, and experiencing it all. We won’t stop until we get there.”
With their new position on the Sliptrick Records roster, Brake Loose are moving one step closer!
Brake Loose are:
Alex Murillo – Vocals | Dave O’Grady – Guitars | Tico Pellegrino – Guitars | Eoin Madden – Bass | Dylan Martin – Drums
https://brakelooseband.com/