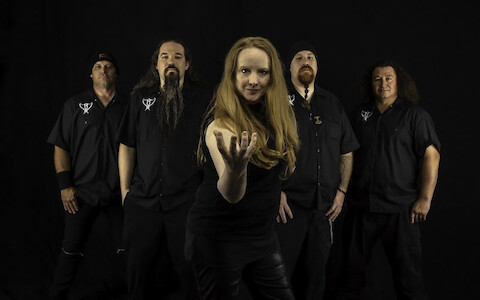 While it is not particularly intended as a concept album, each of the tracks on Live To Tell The Story are inspired by themes of stories and sagas as metaphors for universal human experiences. On the album, the band delves into the symphonic metal genre with with aggressiveness and an sonic intensity like never before, to take you on an epic musical journey.

Live To Tell The Story was mixed and mastered by Jarek Musil with additional audio editing by Radek Zak and Jakub Maggi Malasek. The logo and graphic design was by Greg Witwer.

Track by track:
The first single from the new album, Echoes, was released as a music video in advance of the full album. The song is about how music can transcend time and encompasses all of human experience. The remainder of the album continues that theme through songs that call to mind famous stories such as the myth of Icarus, or the Lord of the Rings, as well as songs that dive deep into the universal experiences of love and loss.

The title track, Live To Tell The Story, is set at the edge of anticipation starting a great adventure with an uncertain end.

If I Fall is inspired by the myth of Icarus. It is a metaphor for the general experience of trying to achieve great heights in life against all the forces that would knock you down or discourage you.

One Last Time is a scene inspired by Norse mythology, imagined from the perspective of a dying warrior, who is looking out into the distance hoping for the final sight to be the wings of the Valkyrie and to be chosen to go to Valhalla.

The album features guest vocalist, Dakota Brown, an operatic baritone, in a duet on the ballad Reverie. While Reveriewas initially written as a solo vocal, the arrangement as a duet brought a whole new dimension to the lyrics which describe the moment of falling into a dream or into love, or maybe they are indistinguishable. Dakota also lent his voice to the background of Echoes.

Leaves Of Lothlorien is inspired by the Lord of the Rings, and borrows the concept of Gimli’s love interest in Galadriel for a completely re-imagined love song.

Labyrinth is one of the more aggressive songs on the album, and explores a darker experience of crazy-making. In this song, a drama unfolding between the male and female vocals, as a protagonist/antagonist duet.

When Rivers Turn Red reaches into the controversial area of the effects of war. The band doesn’t intend to make any sort of political statement through the song, but rather to explore the personal devastation and emotion experienced by people displaced by violence.

The realm of emotions is laid bare in Consolation, which is the most deeply personal song on the album. It goes to the place of deep pain and loss, looking for consolation and answers even when there is none to be found.

The final track on the album, Forever Dream is a solo vocal and orchestra piece with a mystical and existential question of what happens when everything in life has come to an end.

Guest vocals by Dakota Brown on Echoes and Reverie