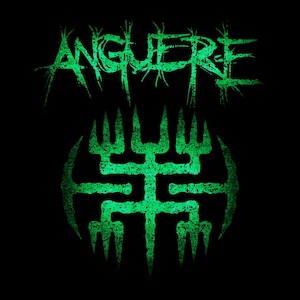 Formed in late 2008 in the city of Rio Claro-SP, the band ANGUERE brings a violent repertoire seeking to combine some characteristics of Brazilian music with various styles of heavy music, performing an angry and aggressive sound.
In the year 2009 records his first studio work under the name of Anguere-Anguere. The standalone CD contains six tracks and is being distributed since its release. Link: https://anguerehardcore.bandcamp.com/album/anguere-ep-2009
In the year 2014 the band ANGUERE returns to produce another independent work, enters the recording studio releasing HxCxRxC that contains three tracks, nothing more than a preview of what would come to 2015 in full force. Link: https://anguerehardcore.bandcamp.com/album/hxcxrxc-2014
In 2015 she leaves full steam back to the studio and this time to produce a very professional work. In August 2015 the band released their single SHOCK with the song Estado de Shock which is a preview of the work that would come out at the end of the year. Link: https://anguerehardcore.bandcamp.com/album/single-choque-2015
October 2015 the band Bullying HC invites the band AGUERE, to perform a totally independent overproduction that would require a lot of professionalism from the bands, a live DVD titled WEBCAST, telling about the underground living in the interior of the state of São Paulo. The work yielded a lot of criticism in the good sense of the bands. Link: https://www.youtube.com/watch?v=CpcxVZ3FSyI
In the early days of December 2015, ANGUERE releases its first official video with overproduction. The video was produced by Studio Valve 9, which has a reference to the song Corrupção FxDxPx which is in the 2014 HxCxRxC recorded work. The video has gained worldwide proportions, it was published by the Hardcore World Wide channel. Link: https://www.youtube.com/watch?v=5QHsUpy3jlQ

We release September 24, 2019, our new track titled “OLHO FAT”. This work has the new formation! Pedro Amaro Giachetti took over the drums a few months ago and to mark his debut is no fairer than a track being performed by him. The track “OLHO GORDO” was captured at Grama Grama Studios, where the drums, guitar and vocal lines were recorded! Mixing, Mastering, drums editing and production of “OLHO FAT” was done by Vintake Studio. The art was made by our partner Roni Arte Gráficas, who made the presentation of this work a little more thematic and amazing. This track is now available on digital platforms such as YouTube, FaceBook, the band's official website, BandCamp and Soundcloud, two days from now on Spotify, iTunes / Apple Music, Google Play, Deezer and more!

Bandcamp: https://anguerehardcore.bandcamp.com/track/olho-gordo
Soundcloud: https://soundcloud.com/anguerethc/olho-gordo
The band ANGUERE continues with plans to perform shows throughout the country and also abroad during 2019 and release of their new album for this year 2019 already with new drummer.