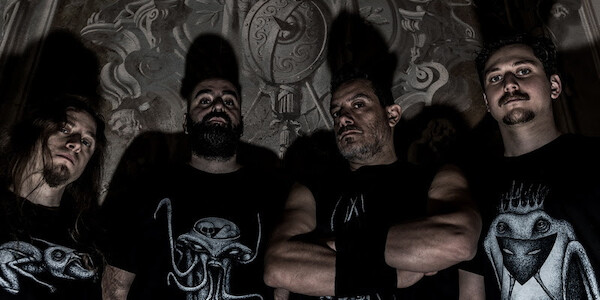 ABBINORMAL Hark Back To When It All Began With ‘1996’

Italian crossover masters Abbinormal release their, long in gestation album, 1996 worldwide via Sliptrick Records. The original body of tracks were written dating back to the year of the album title and now more than 20 years down the road, guitarist Max along with Eric (vocals and keyboards), Marco (bass) and young, powerful drummer LKT, the band have written 7 more pieces and rearranged the old songs that have never actually been released before.
The result is a record containing 16 short metal crossover songs with thrash, grind and death metal influences and a total duration of just over 23 minutes. Even the artist’s choice for the album cover was not accidental: completely drawn with a pen, it is the work of Davide Scianca, a Milanese artist, visionary and openly influenced by the great master H.R. Giger. The basic idea for creating the cover was made by associating a single word associated with each track that composes the album. The end result embodies the insane vision of Abbinormal.

The album was recorded and mixed by Federico Lino at the Ironape Studio in Vigevano and mastered by Marco “Cinghio” Mastrobuono (Fleshgod Apocalypse, Hour of Penance) at the Kick Recording Studio in Rome.